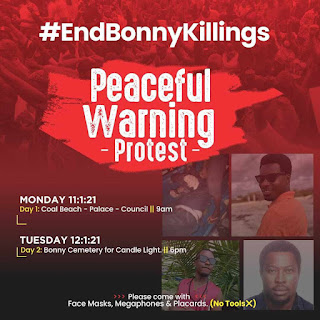 here is a qoute of what she said

"Finima is in Bonny!

This is a fact undisputed...

But I need the rest of bonny to take cue from the finima people and their ways of doing things..

Against all odds we defend what is ours...

Despite the internal dispute we stand as one during crisis..

About 3 years ago, the Andoni people attacked the light house fishing settlement in finima.

a few days after there was another attack on a finima son of Attoni house around the finima cemetery and he was left for dead..

I saw this boy and it was a miracle that he survived...

Our Traditional leadership/and the then youth leadership called on the people of the community..

Young men came out in large numbers marched to light house, day and night they were there,they took turns in playing night guards..

These young men/boys slept outside paying little or no attention to mosquitoes and the dangers of the night,watching and waiting with the military.

When the Andoni boys came to attack with guns and machete,

With the support from the Military some of them were caught..

At a point women/girls were out too...

Since then finima people don rest from Andoni people hand..

They know it wont be business as usual coming to finima on any form of attack..

I'm not saying we should go fight with guns and weapons,but by every means possible if the Government has failed us,what about the traditional institutions??

We need them now..

We need to defend ourselves as a people by ourselves...

We need to act now,

Something has to be done!!

We cant keep dying like chickens in the hands of pirates...

We cant keep sailing with our hands on our mouths..

We can't keep sailing with our hearts in our hands..

A while back I needed to travel with my kids, I could not get on the NLNG boat.

I prayed all through the sail with my children and somehow we missed pirates attack by minutes..

The world needs to know!

the world needs to hear!

Sadly this would only get worse if nothing is done ASAP!

May the souls of the dead RIP 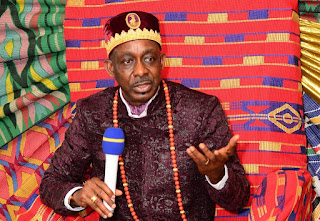 On the 11 January 2021  Bonny Island was on lockdown as occupants of bonny kingdom gather up at the Coal Beach to protects the relentless assaults on sea fearers  along the Bonny – Port Harcourt ocean rout by some unknown sea pirates  who ransack, damage, kill or hijack their casualties.  As per the coordinators, the Protest is Tagged  #EndSeaPiracy will take off by 7am at the Coal Beach, from where they will walk through the roads to the King Perekule Palace, near Ikuba Square in the Madupolo area of the town of Bonny Island.  From that point the protest party will walk through the Mission Road and afterward through Hospital Road to the Secretariat of the Bonny Local Government Council.  From data gathered from posts on the Facebook dividers of a portion of the instigators, the dissidents will at the two crossroads present a 5 guide interest toward the Amanyanabo and Natural Ruler of Bonny Kingdom, His Majesty, King Edward William Dappa Pepple III, Con, Perekule XI, and the Chairman 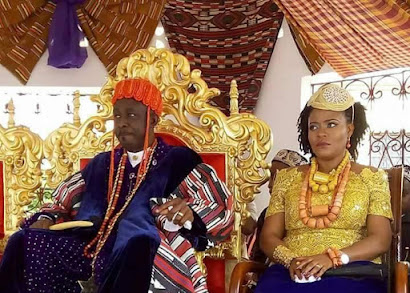